Yeh! It's finished! I'm so happy with how it came out and boy, did I learn a few lessons along the way! Here it is this morning pre-washed in the snow. I couldn't wait to take a picture of the finished product:) 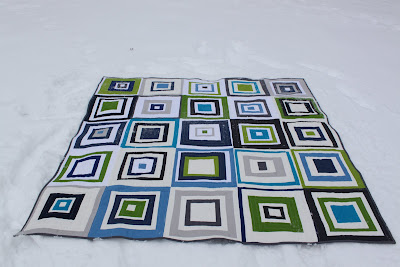 As I was getting it ready to be washed, Miss G had to "jump" all over it and insisted I take a picture of her so this is for her... 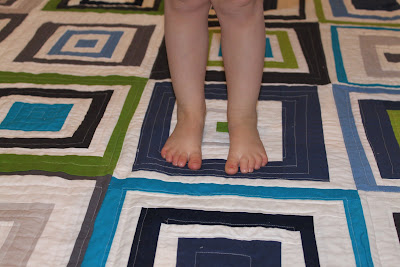 Where to start with all of the "lessons" I learned or "things to be considered"....

I started off with quilting these squares working from the centre of the block and outwards. My biggest mistake was in not rolling my quilt tightly enough while quilting and maneuvering it. I found I was stuffing the quilt through the arm of my machine and it was take an excessive amount of time to quilt each block with all the twisting and turning - especially working from inside the square and outwards. What I realized after struggling with over half of my blocks in this manner was that if you rolled your quilt tightly it was a lot easier to pass it through the arm of the machine. Duh! It seems obvious but I think it's worth repeating for those of us out there who have done the same thing!
Once I started rolling it more tightly, it became a lot easier to quilt the actual blocks. The second thing I changed was that I began to quilt from the outside of the block and worked my way inward. I preferred this method much more as it was easier to maneuver around the block at first and you could envision your overall concentric square quilting (hope that makes sense). I found I started to not quilt as densely and left the centre block (especially if it was a big square) unquilted so that the pop of colour was left untouched and you didn't see a bunch of white thread. Again, just a matter of personal taste, not necessarily a right or wrong thing. 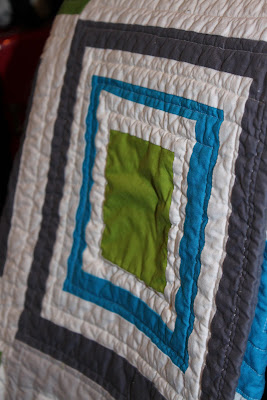 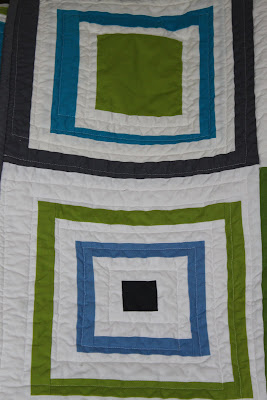 I wished that when I began quilting it I had left some of the centre blocks untouched.
Having said that there are some blocks that I think really look cool from the back - ones that were densely quilted. 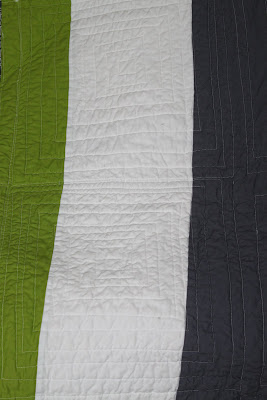 I also think it's important to consider what effect you're wanting to achieve in terms of the concentric square quilting. I decided not to free motion the squares and used my walking foot so that I could achieve a more straight line effect. One is not better than the other - again just a question of personal taste. Since I decided on straight quilting lines, I wish on some of my initial blocks that I quilted parallel to the seam lines. When I look at some of the first blocks I quilted, my eyes are distracted by the quilting instead of some of the last blocks I quilted.
Wow, I must sound really picky:) Don't get me wrong! These are just some of the things I felt that next time I wanted to think about first before I tackle concentric square quilting again. (I do have another drunk love quilt in the making...)

My two "go to" tutorials for bindings are CrazyMomQuilts and RedPepperQuilts
Rita at RedPepperQuilts actually talks about not only bindings, but tackling machine bindings. I too am not a fan of sewing anything by hand. That's probably taboo of me to say (haha) since I know a lot of you enjoy the process of sitting down and hand sewing a binding. I admire you! I have tried both methods of first attaching the binding to the back and machine stitching the binding to the front and also attaching to the binding to the front and stitching in the ditch to attach the binding to the back (Rita at RedPepperQuilts' method). I thought I would try Rita's method for this quilt and I love the result! I used my Accuquilt Go Fabric Cutter to cut out the 2.5 inch strips (my favourite is 2 1/4 strips but heh, I have the cutter and it's nice and convenient). Once I had my binding strips attached using Amanda's method
I then pressed them in half and using a 1/4 inch seam, attached the strips to the FRONT of my quilt. Once I ironed this, I then pinned the back so that the fold of the strip just barely overlapped the sewing line that you had just sewn. I flipped it back to the front as Rita suggests and stitched in the ditch along the binding. Now, I have to say there were definitely some spots that I didn't always catch by stitching in the ditch so I had to go back and attach....but that was just a matter of paying attention to how I pinned it. I found that at first I was folding back the binding to much and then once I stitched in the ditch, the sewing line was almost in the middle of my binding and not at the outside edge. I ripped this out, made sure that I didn't over fold my binding to the back and voila, a much better result!

The corner were sometimes tricky but I know that once I'm able to practice a bit more, they will become easier. The trick to corners are to pin, pin, pin. 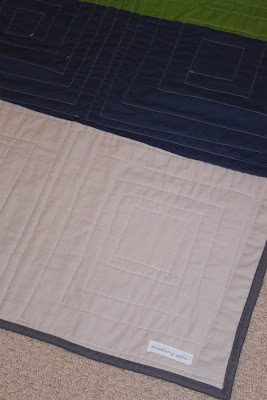 Piecing the Back
Can anyone say....make sure your back is big enough before you pin and quilt! Sure, I know this is quilting 101, but I ignored that little voice inside my head that said, I think it might be a little too small and proceeded anyway! Ah...those voices are there for a reason aren't they!! haha While I didn't do this before on any of my other quilts, I did on this one - and let me tell you what a pain in the you know what it was to correct. I won't bore you any longer with this story...enough said:) I'm happy to say that after all of that correcting, the end result is still really nice and you can't tell as I simply added a few extra seams here and there of the same fabric so it's pretty continuous! Lucky!! 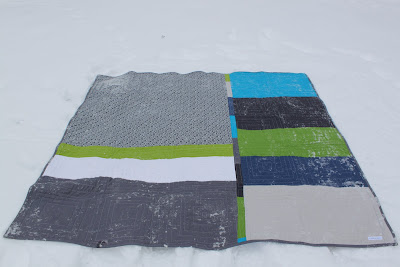 Phew....now I'm done! Hope these little tidbits were in some small way helpful to any of you out there. I guess each quilt is a journey!
I want to say a big "THANK YOU" to all of the ladies from the Pieced Together Quilting Bee 2 who helped me to make blocks for this quilt! Without them, there would be no Drunk Love quilt!!
I can't wait to give it to my stepson tonight!!
Posted by Jody at 4:50 PM