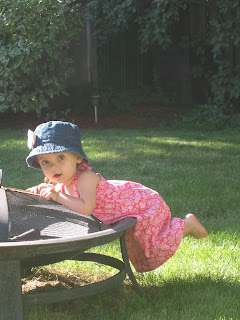 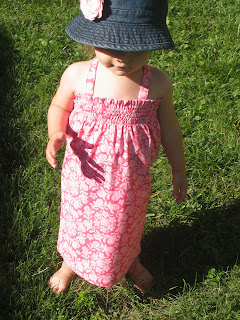 So, I mentioned in my last post that I attended Heather Ross' Weekend Sewing in Vermont workshop this past weekend....which also featured Denyse Schmidt as a guest speaker/teacher. How incredible was that to have two of my favourite designers in one place at the same time! I can't tell you how much I enjoyed it. It was a totally last minute, spontaneous decision to attend. I was just lucky enough to get one of the last spots in the workshop. I started a week's long vacation last week with my husband so I toyed with the idea of attending but kind of felt guilty as I would be going alone. As you know I have a little girl, so the Mommies out there will understand the guilt I had in going away for the first time. My husband is awesome so of course I knew she would have fun with her Daddy, but still I had this twinge of guilt:)
The drive was about 10 hours in total so by the end I was antsy to get there! I really didn't know what I was getting myself into:) I must admit I was a little nervous about the whole weekend...who else would be attending, my sewing skills, etc. However, it took all of five minutes talking with the other women to know I was going to have an incredible time. Everyone was so warm and inviting, funny and witty. There were women from all over the States...Wyoming, Montana, Georgia, North Carolina, New York and two fellow Canadians!!
Our first night was spent settling in, having great conversation, a beautiful meal and setting up our sewing stations. I couldn't believe how warm and friendly both Heather and Denyse were. I don't know what I was expecting, but honestly it felt like everyone knew each other for a long time! That's what I found so amazing. I've said it before here, most of my friends don't share a similar passion for fabric and sewing as I do (except of course my friend Lucy) so I really don't have that outlet in discussing these things apart from blogland!! It was so great to talk to women who were just as excited as I was to work with Heather and Denyse...and then to actually do it!
Heather and Denyse were available to all of us over the entire weekend to help us with our various projects (mostly from Heather's book, Weekend Sewing). As you know, the smocking on her smocked sundress pattern was giving me some grief....or shall I say MY MACHINE was giving me grief....hmmmm. So, literally FOUR attempts later, I was, shall we say, ready to toss the project aside....but I was determined, as was Heather to figure out the problem. Heather even let me use her machine (Italian model) which smocked no problem...however, when I went to make another one for my daughter and using her machine, the smocking wasn't working out. Everytime I pulled the dress out it looked more like a skirt for a 10 year old versus a dress for my 17 month old daughter!! :) Late on Saturday night, we finally figured out the problem...we already knew my computerized machine was too "fancy" shall we say to allow the elastic thread to do its job...it would smock a bit but nothing like Heather's did...not nearly as tight. WEll, wouldn't you know it was the actual elastic thread...Gutermans...which is totally a great manufacturer...just didn't work for us - not to mention my unwashed fabric may have been a bit too heavy...so a combination of all of these factors lead to unsuccessful results....well, once we figured this out...all was good again, even though I was the sacrifical lamb in all of this because I didn't produce nearly the results like everyone else in terms of number of projects completed, but ah....the lessons learned:) haha I'm happy to say it was all worth it because here is my daughter in her dress this afternoon.
More on the weekend later...
Posted by Jody at 10:10 PM 2 comments: